This build will be a Contra Drive version of the Allure. This airframe will actually become the one used for test flights should you be interested in test flying an Allure before buying one. Be warned, if you try one, you'll want one! :-) 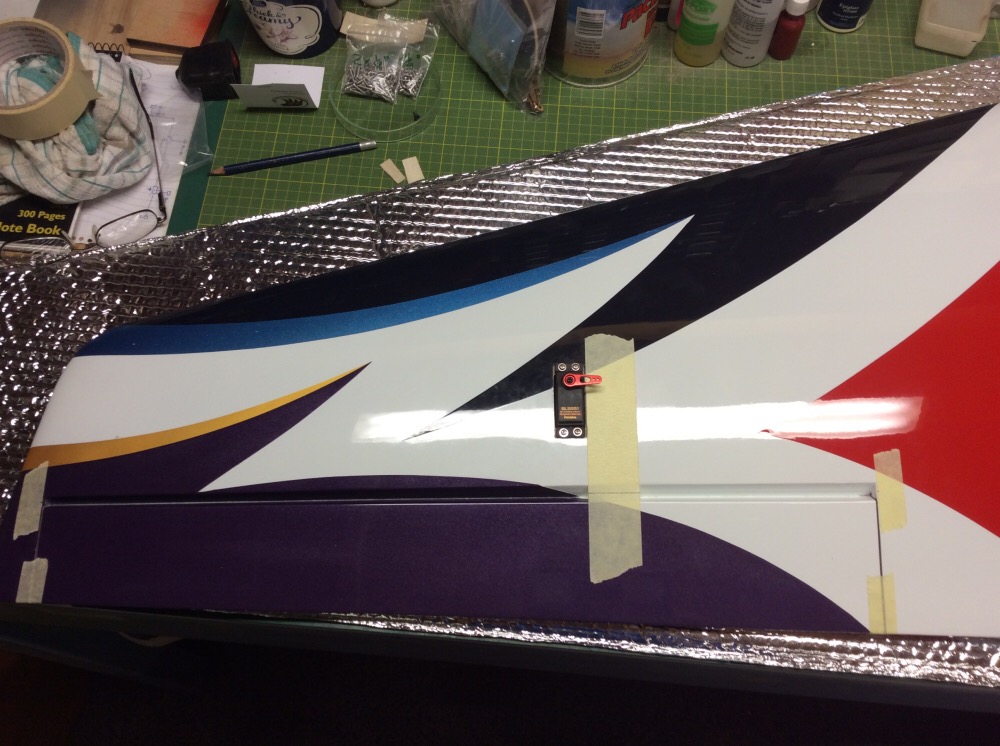 Special Note: When using the CK Aero control horns, the front edge of the horn should be mounted on the edge of the ailerons as shown in the gallery picture below. These horns have been designed in a control linkage program and they are to be fitted in this manner. This results equal travel in both directions. When mounted this way, the pivot point will be slightly ahead of the hinge line. I have used the 20mm CK Aero control horns on the ailerons.

With the wings, the servo trays are preinstalled. I used Futaba BLS551 servos in the wings. I found that a small adjustment to the servo opening was required and an internal rib also needed some minor Dremel therapy to allow clearance for the servo lead. Then the servo was positioned and screw holes marked out. To make the holes, I gently use a centre pop to make a small indentation on the positions marked. Then with a 1mm drill bit in a pin vice, drill the hole by hand. It's real easy and eliminates the need to use a big hand drill etc. 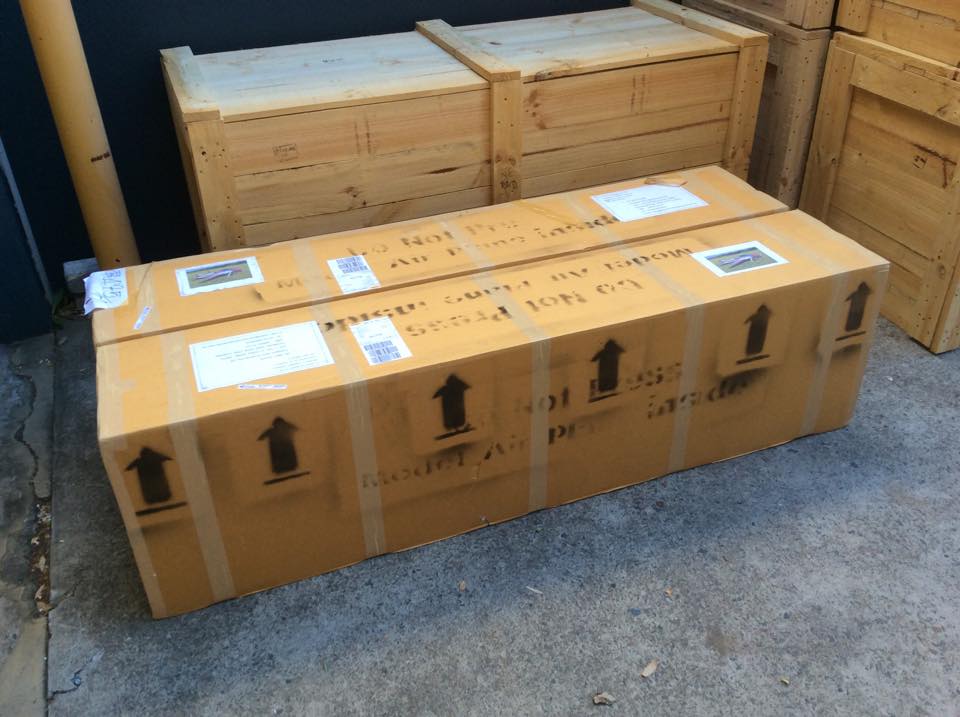 The Allure comes packed in a very sturdy cardboard carton. The carton effectively has a second layer of cardboard covering the top and sides which must be removed prior to opening the top of the carton. The cardboard itself is approximately 10mm thick and provides great protection for the model.

Below is a list of equipment to be used, brands, part or model numbers where available, the quantity and weight.

For the Allure you want servos of the following specs: Elevators 4-5kg torque, Ailerons 8-10kg torque and on the Rudder you want 10-16kg torque. Remember that for F3A you want servos with great accuracy and centering abilities. Buy the best servos you can afford....

We are now agents for MKS Servos. For the Allure we suggest DS9960A+ for elevators and BLS950 on Rudder and Ailerons. Another choice would be HV747 on Ailerons and Elevators with a HBL575SL or HV1220 on the rudder.

For JR users, Dave Lockart suggests the following: MP31S on elevators, MP91S on ailerons and MPH83T on rudder.

There are probably many other suitable servos in both brand and type. The ones suggested above are only a guide. As you can see in the table below I'm actually using different servos again in my Allure but will soon be using MKS.

Taking the time to measure and check flying surface alignments and correcting any minor differences or errors is VERY important. The model will fly way better if you take the time to do this task. Most people are too lazy to do it! The factory will get things pretty close but one should not take it for granted that they got things exactly right. 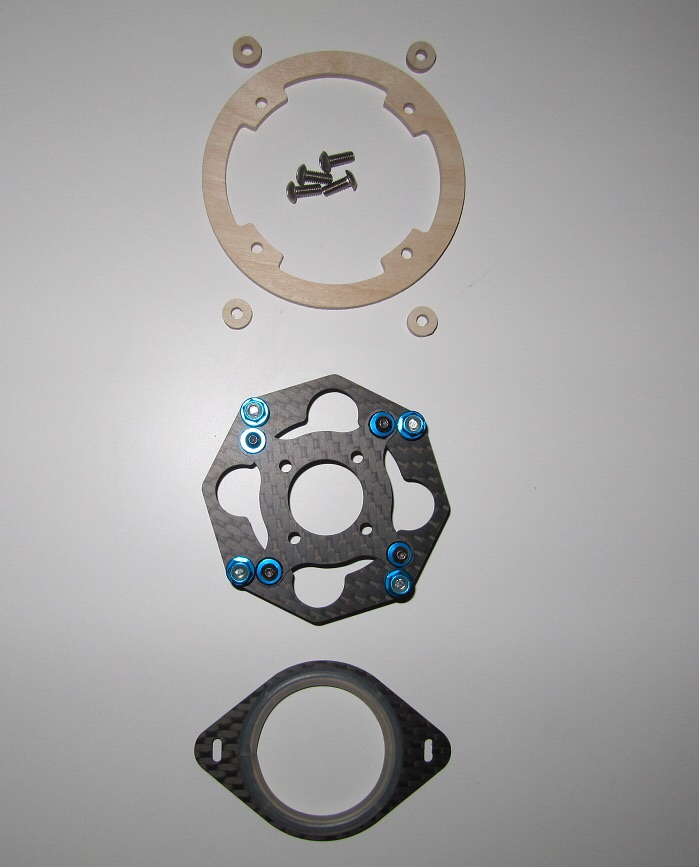 I'll be using a soft mount designed by Ralph Schweizer of Austria. This mount is of the highest quality and allows the whole contra system to be removed through the front of the fuse by loosening four screws and turning the drive 90 degrees anticlockwise.

The Allure construction and set-up was completed at 11.30am on Thursday the 9th of April. The model was maidened that same day at Pitt Town, NSW. The conditions were quite poor with a 25kmph southerly wind blowing straight in but the conditions were totally flyable. The Allure handled the conditions with ease. I found the initial settings for throws were a little too "hot" for my liking. After Subsequent flights a little tweaking of throws and expos was done. I ended up at the settings tabulated in the "Alignment & Setup" blog entry.

The Performance of the Allure was so good on this first flying session that I decided to compete with it in the Australian Nationals in Brisbane that same weekend. After the Nationals, Arron Garle was given a fly of the model and he was extremely complimentary on the model's flight performance and loved the contra. he said "the model just gives you time to think".

Update - I have now fitted Futaba BLS173SV servos and Futaba aluminium servo arms to the Allure. These servos should improve elevator tracking and the servo arms are more rigid than the plastic Futaba arms used previously.

Special Note: When using the CK Aero control horns, the front edge of the horn should be mounted on the edge of the elevator as shown in the gallery picture below.  These horns have been designed in a control linkage program and they are to be fitted in this manner. This results equal travel in both directions. When mounted this way, the pivot point will be slightly ahead of the hinge line. I have used the 17mm CK Aero control horns on the elevators.

The supplied stab servo trays are a little small for my Futaba BLS153 servos. This being the case, I made some new ones out of lite ply. Future models will have this tray fitted and the cut-out will already be done for you. The actual tray will also be a little larger. I've made the trays a little bigger all round to allow more gluing surface area.

In this blog entry I'll describe a couple of electronic devices I've fitted to the Allure. The first is the Throttle Tech device from Tech Aero. The second is the Unisens-E device from SM Modelbau of Germany.